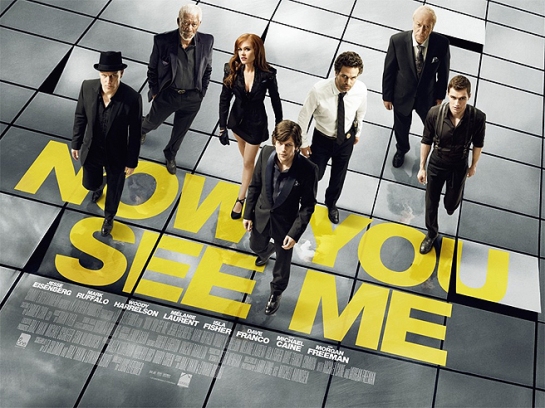 Four of the nation’s greatest magicians (Eisenberg, Harrelson, Franco, Fisher) are brought together by an unknown person, and instructed to do 3 grand shows. They get financial backing from a multi-millionaire insurance company owner (Caine), and before the film is 20 minutes in, they are doing their first sold-out  show in Las Vegas. In this first show, they, “rob,” a bank using their magician skills. Don’t worry: This movie does not actually believe in magic, well not really at least. The film then goes on a roller coaster ride through the story of the 4 magicians, the FBI crew (Ruffalo, Laurent) that tries to stop them, and one magic debunker (the one and only Morgan Freeman).

Louis Leterrier direction brings a fresh, new feeling to this story that shares those qualities. His visual crafting is part of what draws viewers in for the 115 minute ride. Right from the beginning, Leterrier knows what direction he wants to take the film. Having a vision as a director is imperative to critical success of a film. Of course director’s need far more than vision, but that is one aspect that Louis Leterrier thrives in capturing. His flaws lie in the action sequences, but fortunately, we don’t see too much of those.

The trio of writers, find success in the basic plot line, but as the plot begins to develop, viewers will see their flaws. The attempt to be too witty and tricky is found far too often, especially in the mystery/thriller genre. While Now You See Me is no exemption, it’s strengths out weigh its weaknesses in writing department. The film struggles with knowing when to stop, and ends up making far too many twists for its own plot. The script, however; can be very witty, and at times the motor behind the film.

Highly talented actor, Jesse Eisenberg, in Now You See Me

The cast, not surprisingly, is the strongest aspect of the film. The film is flowing with some of my personal favorite actors including Eisenberg, Harrelson, Freeman, and Caine. The entire cast fulfills their roles perfectly. Without this entire cast, driven by Jesse Eisenberg, the film would inevitably drown in its own flaws. The cast turns a mediocre film into a good film, and that is how it always should be. In this modern day, there is no excuse for poor acting. Casting directors have enough people to choose from. Oh, and more quality roles for Jesse Eisenberg, anyone? When Jesse is on, he might be my favorite young actor in the business.

Overall, Now You See Me will thoroughly entertain its viewers, and will leave them feeling as if it was $12 well spent. That is given that these viewers recognize that it is May, and entertainment is simply all you can ask for. The film’s pros ultimately outweigh its cons, and eh, who doesn’t love a little bit of magic?